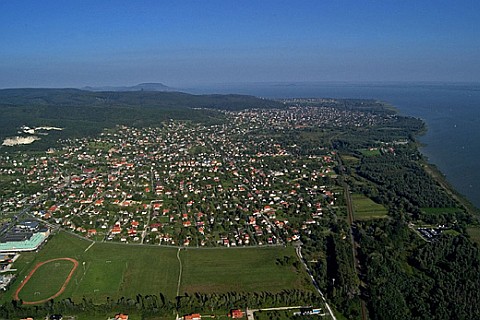 The settlement with its nearly 4,000 inhabitants is located 100 km from the western border of Hungary (Austria, Slovenia and Croatia), on the north-western shore of Lake Balaton, at the foot of the Keszthely Hills, in the neighborhood of Keszthely.
The settlement, which covers an area of ​​almost 20 km2, is already a high-ranking, family-friendly tourism destination. Its climatic situation is favorable. The favorable effect of the hillsides on the southern slope is only enhanced by their Lake Balaton water, which reflects sunlight, thus creating a pleasant, “riviera” -like mesoclimate. This climate is extremely favorable for both the remaining traces of viticulture and tourism. The value of the hills is their landscape, the hills offer a magnificent panorama of the lake and the southern shore.

The Hévíz-Balaton International Airport in Sármellék is located 15 km from Gyenesdiás. There are more than 550 domestic bus services in the area, and all long-distance buses stop in the village.
The settlement has two railway stops and direct trains run from Budapest, the Eastern and Southern Railway Stations to Keszthely, as well as on the Miskolc-Keszthely and Pécs-Keszthely routes. The Balaton Bike Route and the National Blue Tour route also pass through the settlement.